Plans to carry out an ambitious and substantial makeover have been commissioned with a local architect. This makeover is to improve the whole of the central part of the complex to create an inviting entrance-lobby area, provide a practical kitchen, modern toilet facilities and provide storage areas that are all much more in keeping with today’s use of the hall. All this whilst staying substantially within the footprint of the existing buildings and maintaining the overall appearance of the Hall that can be seen from Ashton Road.

Improvements to the main Hall, Committee room and outside areas are also included in these plans, these involve installing energy efficient and cost effective heating,  substantially upgrading the roof by replacing the 90 year old crumbling slates and adding a weatherproof membrane plus insulation, replacing the disintegrating parquet flooring, re-configuring the external entrance points to the building to improve access and safety for all, to name but a few.

These improvements will create a modern facility that Siddington can be proud of and put the Hall in good stead for future generations. This will of course cost a considerable amount of money and activities are now underway fund raising and  investigating possible sources of grant funding to enable the Trustees to achieve these plans.

In the mean time some improvements are very urgent and these will be carried out as funds and needs dictate.

January 2015 Update:     We are pleased to announce that we have initiated the roof repairs as a matter of priority during the Autumn of 2014 and now have a new warm and weatherproof roof. The elderly slates and battens were all removed and for the first time insulation and waterproof membrane were installed, along with fitting new battens and new slates. This was paid for by numerous fund raising events undertaken over the last few years and careful management of the day to day running costs.

Our next project is to refurbish the kitchen which is believed to date from the 1960’s and is in sore need of update.

September 2015 Update:    We have now started our kitchen refurbishment which is planned to be complete by the middle of October 2015. The old kitchen cupboards and work surfaces, which are believed to date from the 1960’s, will be completely replaced. New non-slip flooring, tiling, water heating, electrics and plumbing along with other repairs and redecoration will complement the new units. This is being paid for from our own fundraising events, income from regular and one off users and careful management of maintenance and running costs, plus a grant from Siddington Parish Council to whom we are very grateful.

November 2015 Update:  The New Kitchen is now complete and in operation! Good clean lines, easily maintained and cleaned, plenty of storage and functional. 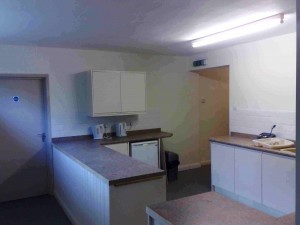 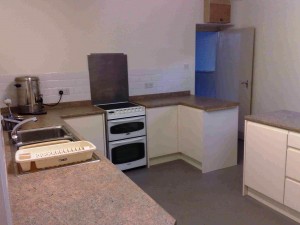 New Floor in the main Hall.

This Summer has seen a lot of activity in the main Hall. During the first two weeks of August the 30+ year old and crumbling parquet flooring was  replaced by a heavy duty light Oak woodblock flooring laid in a traditional herringbone pattern. Prior to this the 4 large old Night Storage heaters, which were sitting on the old floor, had to be removed along with the rickety main entrance internal lobby wooden structure. Sufficient funds to replace the floor and reinstate the lobby/porch had been received as part of a Section 106 planning condition for the new housing at North Siddington. This planning condition had been specifically identified to be allocated to improvements to the Village Hall. Many thanks to Jim Broad and his Broad Oak Flooring team jim@broadoakflooring.co.uk for their magnificent efforts, completing the flooring works on schedule and to budget.

The storage heaters were considered to be unlikely to survive the removal and re-installation process and as they had become unreliable in the last few years the Trustees had already planed to replace them with a more flexible, economic and eco-friendly heating system. An Air to Air heat pump system was identified which will provide all the heating needs for the Main Hall and if required could also be reversed to cool the Hall in hot weather. When it was  realized that it would also be necessary to replace the heating at the time of replacing the floor there were no funds available to cover this.  A grant specifically to cover the heating replacement was received following a successful application to the National Lottery, to whom the trustees are extremely grateful. Details of the Lottery Grant appear here.

Many thanks to Hans Erikson of Environmental Heating Solutions and his team for their rapid installation of the Air to Air equipment and to Craig Rennie of Renco South Cerney  for all the associated electrical installation work.

Replacement of the lobby.

It was decided to investigate the possibilities of replacing the old rickety internal lobby with a an external porch rather than creating a new internal structure. A natural Cotswold stone construction to match the existing building was considered most appropriate. This should not only enhance the rather bland East elevation (main view from Ashton Road)  but also increase the usable space inside the main Hall. Initial discussions with CDC Planning department have indicated that this idea would likely be favourably considered by the planners so detail plans were commissioned and  have been submitted.

December 2016 Update:  We have been granted Planning Permission by CDC to construct our new Cotswold  stone porch at the front of the Hall. Work is now underway to create detailed specifications to enable us to get quotes for the works.

October 2017 Update:  During the year we have received 6 separate quotes  for the build of the  new external porch/lobby. Unfortunately all are significantly above the original estimates we were working to and budget that we had set aside.  This project has therefore had to be put on hold until we are able to raise further funds to proceed.

September 2017 Update:  Following a successful Grant Application to the Summerfield Trust we have completed the installation of a second Air to Air heat pump system to heat the rear section of the building and complement the system installed in the Main Hall last year. This has a different arrangement as it has a single heat exchanger unit and the warm air is distributed via ducts in the loft to ceiling vents in the Committee Room, Kitchen and Toilets. The work was once again carried out by Environmental Heating Solutions and Renco.

Replacement of the lobby.

January 2019: At long last the build of the new  porch is to start at the beginning of February 2019. This is after a further delay of over a year caused by a number of issues largely out of our control .  At the end of 2017 we had the funds in place and had appointed a local builder to carry out the build. But early in 2018 we discovered that Gloucestershire Highways  claimed that half the area outside the front of the hall had been adopted as highway in around 1906 and so we could not build on that part until the land was legally released from adoption  to the hall. The application to do this has been successful but has delayed the project start until after December 2018. This entrance lobby will become the main Hall entrance and should provide a pleasant and welcoming way into the Hall, adding a feature to the somewhat bland front elevation. At the same time it will reduce road noise, reduce heat loss and draughts and improve safety by removing the direct exit route from the Hall towards the often busy Ashton Road.

The Hall and Committee Room will be available throughout the build with disruption kept to a minimum. The only restriction being that maximum Hall occupancy is  60 persons during this time. The build is expected to take approximately 12 weeks.

July 2019  The new porch is complete and on the sunny evening of Friday 28th June was formally opened by  Lady Bathurst. At the same event a new commemorative stone dedicating the Hall to those that fell in WW1 was unveiled by Earl Bathurst.  Earl Bathurst gave a short and amusing address  outlining his families involvement in the creation and support for local village halls during the last 100 years and in particular Siddington’s Hall. A simple reception of canapes and sparkling wine was held afterwards in the Hall and all the residents and guests present at the opening were invited to attend. Our thanks go to Ian Franklin, as main contractor of the build, for his excellent work and help during the build. Our thanks also go to Cotswold District Council and Siddington Parish Council for their grant donations towards the cost of the build.

Watch this space for progress.

If you feel that you are able to help us in any way to achieve these ambitious goals please do not hesitate to contact one of the Trustees,  ring our dedicated phone line 074 073 52025 or email us at siddingtonvillagehallbookings@gmail.com .